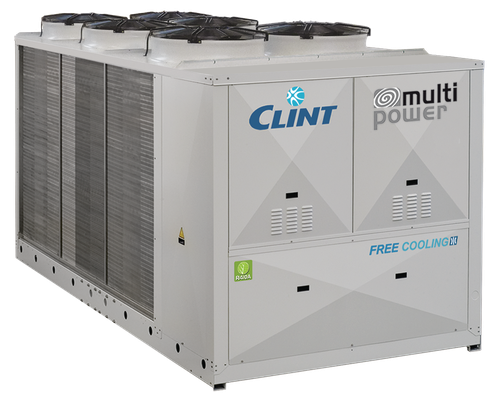 The liquid Chillers of the CHA/K/FC 726-P÷36012-P series, with R410A refrigerant, provide advanced technology, flexible and reliable, through an intelligent control module which optimizes the operating times and the powers delivered by the Scroll compressors, according to the needs of the systems, both civil and industrial, where the production of chilled water is required in continuous service throughout the year. During the cold months, in FREE-COOLING operating mode, the liquid returning from the system is cooled directly, by way of the forced convection of outside air through the condensing coil, thus reducing the energy required for the Scroll compressors operation that the units are equipped with. A system of 3-way valves, controlled by the electronic microprocessor controller that manages the entire unit, can, depending on outside air temperature, operate in CHILLER, FREE-COOLING or MIXED (CHILLER and FREE-COOLING at the same time) mode. CHA/K/FC 726-P÷36012-P allows the reduction of inrush currents generated, the elimination of inertial accumulation tanks and an excellent silent functioning, as the fans adjust their speed to the actual load of the system, providing great benefits especially at night.
Are available as option the new EC Inverter fans with high available static pressure and efficiency.

On request, units can be supplied with R452B and R454B refrigerant.