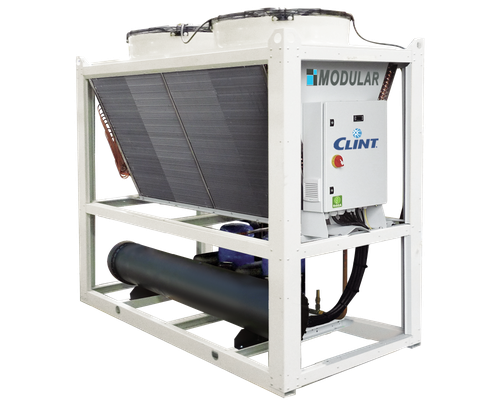 The liquid Chillers and Heat Pumps of CHA-M/MK 252÷684 MODULAR series, with R410A refrigerant, are designed for medium and large sized service or industrial buildings. They are used, combined with terminal units, for the air conditioning of the rooms.
The MODULAR units feature a dedicated layout of the unit itself and its internal components in order to build big capacity systems through modular combination of single units.
The range is made of 4 base modules from 18 to 51 TON, featuring V design condensing coils, axial fans, single or double cooling circuit with Scroll compressors and shell and tube exchanger.
The electric panel positioned frontally and the optimization of internal layout allow to build multi-unit modular systems of extremely compact footprint.
The multi-unit systems can be centrally controlled with master-slave logic through RS485 ModBus connection that ensure balancing of operation time among the units and backup in case of failure.